It’s kind of a debate that whether feeding your dog a bone is safe or not and if they are able to digest it. Though some of the bones can be safe for ingestion by your dog but not all of them as there are some kinds of bones that your dog cannot fully digest.

Dog bones come in a number of sizes having different densities which implies that while one kind of bone could be safe for your four-legged pal according to his breed type, the other one might be dangerous. 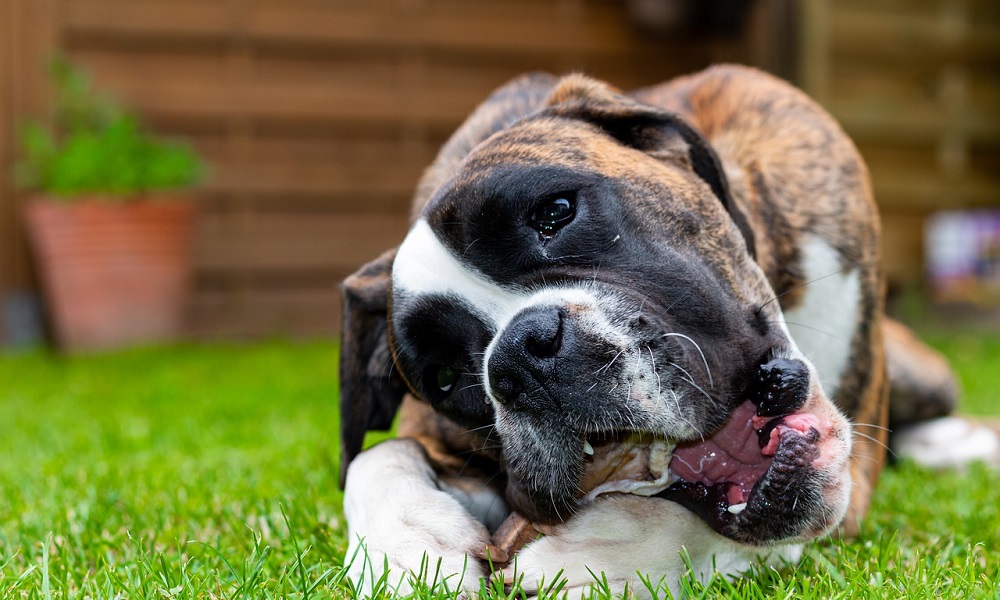 While many owners without any hesitation tend to give large uncooked or cooked bones to their dogs, there are a few things that they must keep in mind like after being cooked, the surface of the bones becomes sharp and brittle and can cause some serious damage to your dog after being swallowed and passing through the digestive system. Like the cooked bones, raw bones could also be hazardous as they can cause blockages when they are swallowed.

With all these facts kept in mind, you should also consult your vet in this regard. He will be able to guide you properly that which type of bone might pose a threat to the health of your dog and which bones wouldn’t because you want to be as safe as possible when it comes to your pet. If you are well informed about the risks and benefits of bones and follow the rules properly, it might be good and safe for your pup to have a bone every once in a while.

Dogs love to chew on bones and eat them for a number of reasons. First of all, bones are quite tasty and full of nutrition because of the bone marrow present inside them and the meast attached to their surface. The marrow present inside the bones has good amount of fat and the bone that contains marrow is rich in calcium. Other than these nutrients, the meat that is attached to the bones also contains a healthy amount of protein.

When it comes to chewing, young puppies chew onto bones in order to get relief from the pain that they might be suffering in their gums due to teething. Other than that dogs just find it amusing to chew on things specially bones as it helps to kill their boredom and keeps them occupied. Chewing also keeps their teeth healthy and their gums strong. It helps removing the plaque or other leftover food particles stuck in their teeth, by the scraping action of the teeth against the bone.

Which Bones Are Safe for Dogs?

There are some general rules that you must follow before giving your dog a bone in order to avoid any hazardous outcomes or health risks:

How to Feed Your Dog Bones Safely?

If you are opting for bones to feed your dog you need to make sure that you are following the necessary precautions and following the rules which would not pose a threat to your dog’s health. Some things that must be kept in mind while you’re giving your puppy a treat in the form of a bone are as under: 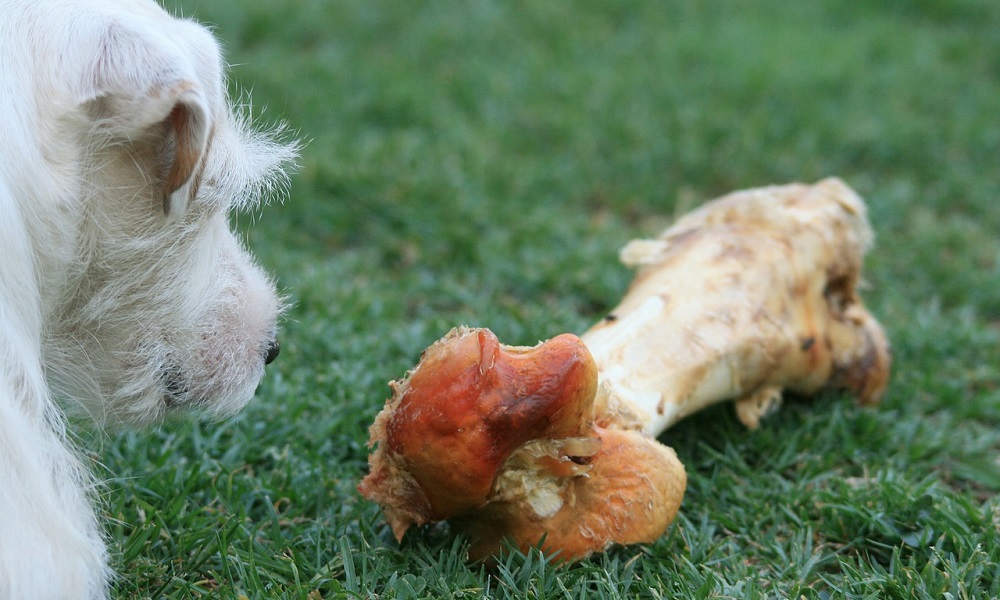 The Proper Size, Type, and Density of The Bone: Always go for the bones that are raw and fresh instead of the cooked or dried ones like those that you find in the pet supply stores. A bone that has been cooked or dried becomes hard and brittle which may lead to the breakage of the bone into small sharp pieces which your dog can swallow.

These sharp pieces might become the reason of pain, infections and wounds inside your dog’s digestive tract. On the other hand, raw and fresh bones are springy and bendy but not all raw bones are good for your dog either. The type of raw bone that you should go for is the one containing bone marrow inside it.

Always go for the ideal bone size according to your dog. The bone should not be too small as it can be swallowed by the dog and cause blockages and choking, and not too big that it may lead to broken teeth.

Feeding Your Dog Under Supervision: The most important point to be kept in consideration is to always feed your dog under your supervision, whether he is having a bone or any other form of food you must always keep an eye on him.

In the case of bone feeding, many things might go wrong if you leave your dog unattended with a bone might lead to a number of mishaps such as your dog damaging his teeth by chewing too hard on a big bone or swallowing a small, sharp piece of bone that is not meant to be swallowed. To avoid these health threats, you must never leave your dog alone with a bone.

Avoid Pre-cooking the Bones: Pre-cooking makes the bones lose its nutrients as well as makes them brittle and easy to break. These bones easily break into smaller pieces which have pointed ends and if they get swallowed by your dog, they can cause serious damage to their mouth, tongue and internal organs.

Time Management: Make sure that your dog doesn’t chew on a bone for more than 10 to 15 minutes at a time. In this way the chances of injury are reduced to a much greater extent.

Process of Bone Digestion in Dogs

Dogs are usually listed under the category of omnivores which means they can eat both vegetables and meat just like the humans. But there digestive tracts are quite different from that of the human hence their diet and the way of being fed is different too.

The very first part of the digestive system of a dog is the oral cavity which is equipped with a great set of sharp teeth that are specially designed to cut and rip the meat off their prey. The large canines come in handy when the mouth needs to separate the meat from the bone. 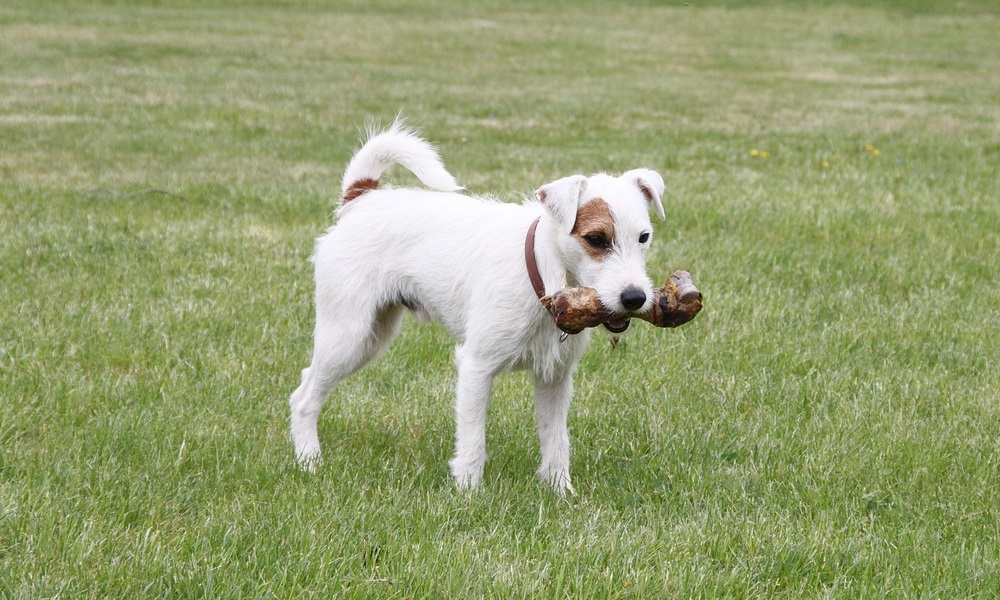 The sharp teeth also help in speeding up the chewing process so that the food can be eaten quickly. Then comes the powerful esophagus which pushes the bones into the stomach cavity in a quite easier way. For the digestion process to start, the complex food material must be vroken down into the simpler form first.

The pH value of your dog’s stomach plays a great role in the digestion of the food. The lower the pH value would be (acidic) the quicker hydrochloric acid and other enzymes present inside the stomach would act upon the food and break in into different nutrients.

A major role is played in digestion by the quality of the diet of your dog and also of your dog is drinking sufficient amount of water. This is the reason why a proper diet is responsible for maintaining the health of your dog.

Benefits of Bones for Dog’s Health

Raw bones offer a number of physical, mental and nutritional benefits to the canine species. Consumption of bones not only helps in teeth cleaning and maintaining oral health, but it also provides a number of essential nutrients to your dog. Raw bones are digestible and completely natural and must be included in your pet’s daily diet. Among many benefits of bones some of them you can find below: 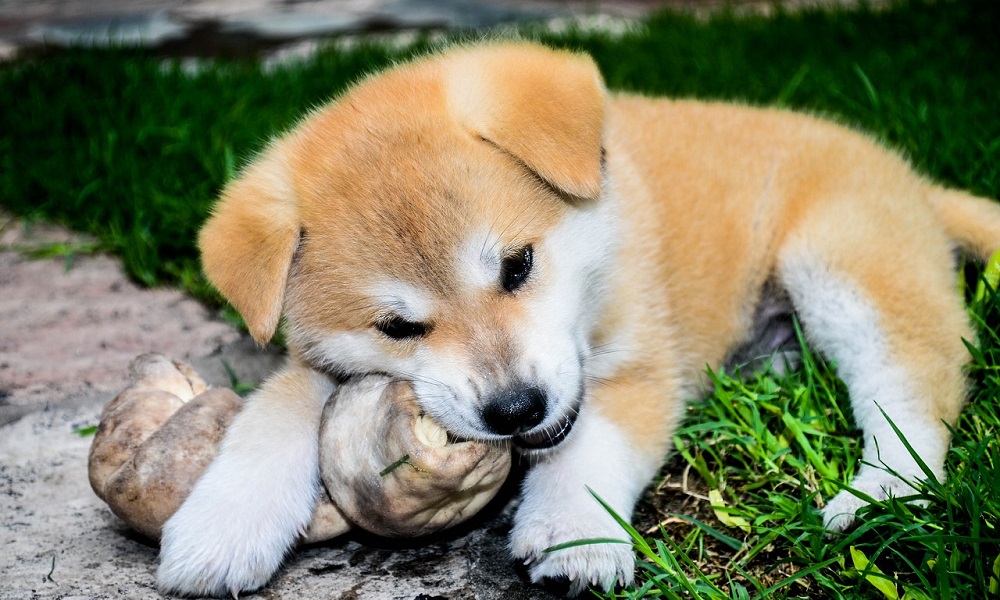 If you’re not brushing your dog’s teeth regularly, there is a great chance that leftover food particles will get stuck in his teeth specially the back molars, and would further lead to a number of problems such as bad breath, cavities, gingivitis and can increase your visits to the vet.

When you give your dog a bone after the meal, It causes the stimulation of salivary enzymes and a good chew from 10 to 15 minutes would make a great difference in removing the build-up tartar and plaque from the teeth.

Raw bones are a good source of a number of minerals and essential nutrients. Calcium phosphate, the main component of bones, is a mineral aiding the proper growth of your dog. Rather than going for calcium supplements for your dog, you should opt for a more natural source that is the calcium present inside the raw bones which is also easily digestible.

The excessive self-licking and scratching of your dog can be avoided by giving him a bone in order to keep him occupied and less anxious. In this way his attention would be diverted and he would start exhibiting a positive chewing habit.

Chewing is a natural instinct of dogs and when chewing onto things comes with some extra nutrients just like bones, what could be better than that. Although this habit might lead to some serious problems as well if not supervised properly.

Your dog is not aware that which bone is good for him and which is not but you know that very well, you know your dog’s health conditions and merits and demerits of feeding your dog a bone so you should choose wisely.

Other than that one can always consult the vet to get a better idea. Avoid giving your dog’s the bones that are the size of his mouth because there are high chances that he would try to swallow it and choke himself. Always go for the uncooked bones that are at least bigger than your dog’s mouth.

Is it harmful if dogs eat bones?
The majority of the raw bones that are not cooked can be eaten by dogs. For example, the raw bones of turkey, chicken pork, Lamb and beef are soft enough to be chewed and eaten by your dog. Dogs can digest these bones.

However, you should avoid cooking these bones because in that way they would become hard and might break into small sharp pieces when your dog is chewing on it. There might be a risk of choking into small bones as well if they are not properly chewed first and the bones that are too hard can damage your dog’s teeth.