Dogs are infamous for consuming peculiar stuff, which may involve objects that are normally deemed indigestible. Some dogs chew stones or branches, others tend to eat leftover sanitary products, and some also attack the cat’s litter box.

But today, we are going to learn about another inedible element that certain dogs consume on occasion: tobacco. Cigarettes are shockingly hazardous to pets, particularly small breeds. Below, we will discuss the problems that arise when your dog swallows a tobacco product, what you can do, and your pet’s probability of recovering.

Depending on the product and form, each cigarette consists of between 10 and 25 mg of nicotine. That means one to two cigarettes can make your pet really sick and even hospitalized. However, most dogs reject cigarette butts because of their terrible taste.

They can even throw them up if they accidentally consume them. If you see your dog chewing cigarette butts, the only thing you should do is induce vomiting as quickly and efficiently as possible. 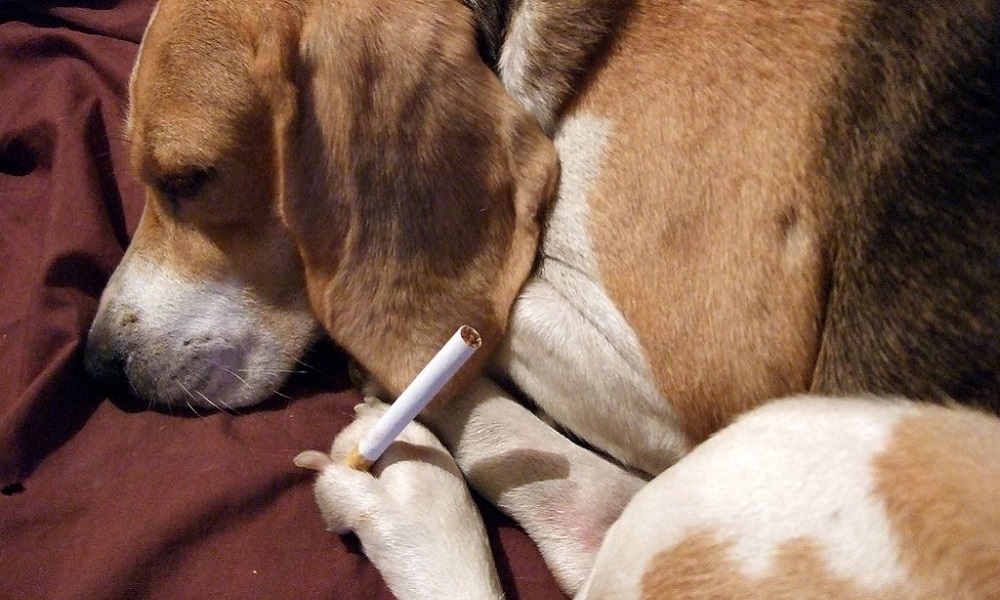 How Does Cigarette Affects Dogs? 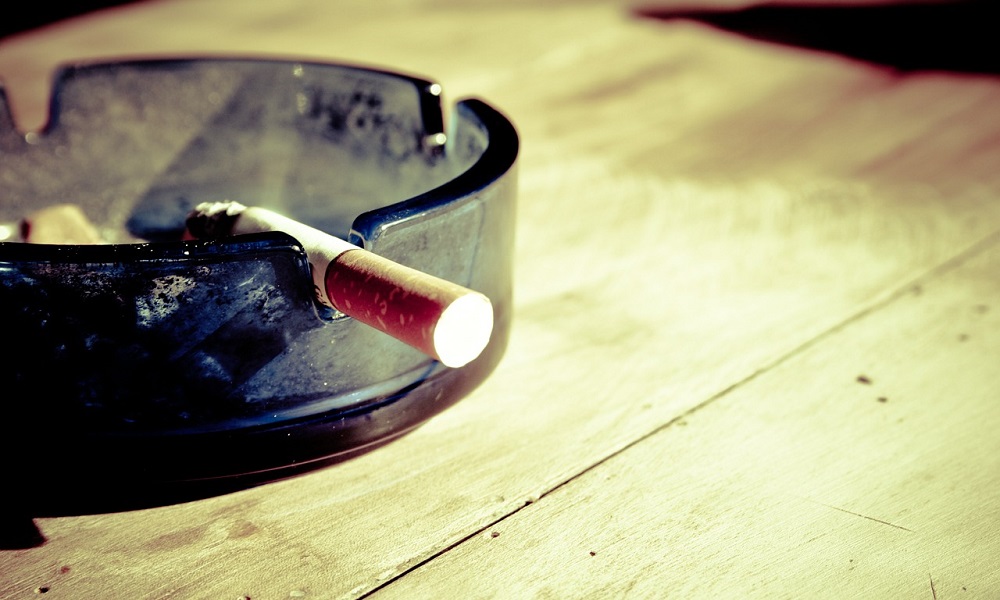 Signs typically appear within 1 hour of ingesting nicotine. As a result, suspected nicotine consumption is a true emergency. If your pet has eaten or is suspected of having cigarettes, contact your veterinarian immediately and take them to the closest emergency department.

Cigarettes can increase their heart rates, and they can become very distressed. It can also cause breathing issues, which can lead to cardiogenic shock and respiratory failure, both of which can be lethal.

When your dog gets exposed to substantial amounts of nicotine, its neuron terminals get distorted or blocked, resulting in more severe symptoms of toxicity. Several other medical conditions like lethargy, exhaustion, dystonia (wobbly movements), and paralysis are also common outcomes.

Read More: What to Do if Dogs Ate Tinfoil

Risks of Nicotine Poisoning in Dogs 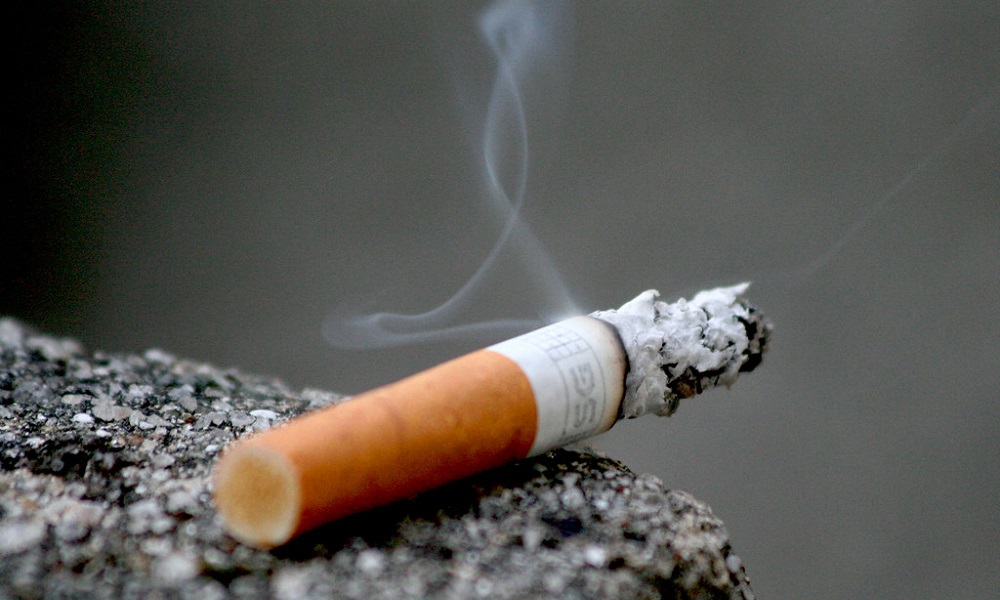 Nicotine toxicity is a severe problem that occurs to a pet wherever they come in contact with cigarettes, chewing tobacco, nicotine gum, patches, or other tobacco products. Nicotine mimics acetylcholine, a drug that is responsible for nerve stimulation.

Clinical symptoms have been identified at levels as low as 2.5 mg/kg (milligram per kilogram of body weight), with 10.2mg/kg being the median fatal dosage in dogs. Since the intestinal system easily absorbs nicotine, surrounding tissues and skin, signs appear within one hour of exposure.

According to reports, humans fully excrete nicotine from their bodies within 16 hours of ingestion/inhalation. Furthermore, excretion takes place entirely via the kidneys and is accelerated while the urine is acidic. The exact process occurs in pets animals.

The dosage of exposure heavily influences the diagnosis for nicotine toxicity. For example, minimal toxicity has a decent to outstanding diagnosis, while high-dose exposure has a bad prognosis.

Signs of Nicotine Poisoning in Dogs

Signs will appear as soon as one hour post-consumption. Among the indicators are:

Nicotine toxicity is easily confused with other overdoses such as arsenic, sweets, chocolate, organophosphorus insecticide, strychnine, etc. Hopefully, there would be smoke residue in the vomit that would reveal the diagnosis.

The sign of nicotine consumption largely depends on the amount. Most of the time, it shows symptoms within an hour. Initially, you may notice your pet drooling, overexcited or experiencing diarrhoea or vomiting.

However, vomiting will help them to wash out the stomach and remove any residual tobacco products. These are serious symptoms that can lead to severe health issues and even death. So, if you notice these signs, contact your veterinarian immediately.

How to Prevent Dogs from Ingesting Cigarettes? 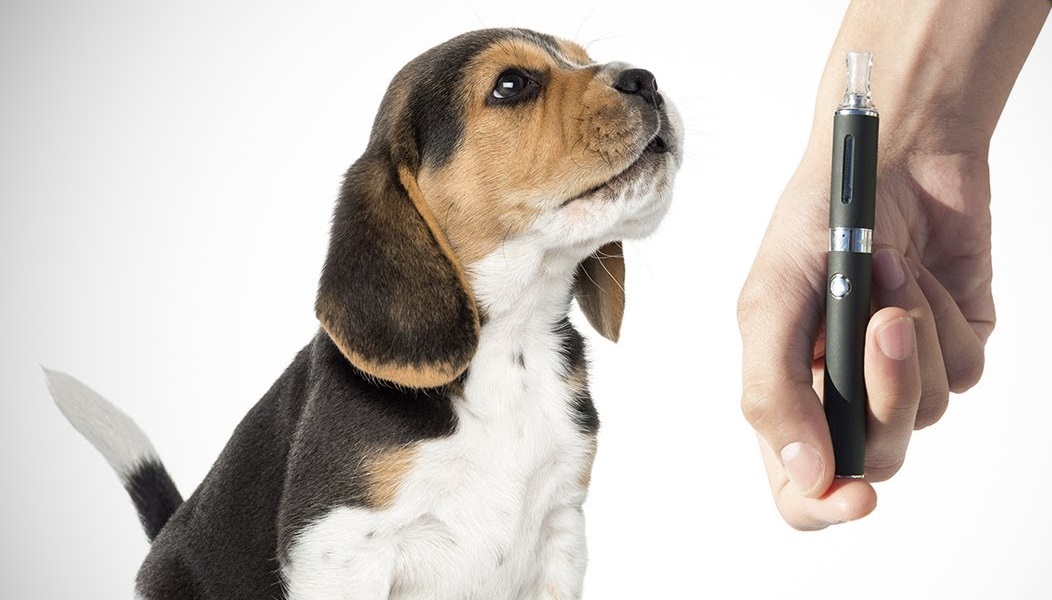 Keep all nicotine-containing items, such as tobacco, e-cigarettes, nicotine patches, and gum, out of dogs reach. Fill e-cigarettes away from pets before refilling them. If you think your pet is ill, contact your veterinarian right away.

Often contact your veterinarian for health-related queries since they are familiar with the pet’s medical records and offer the right decisions for your pet. The simplest form of treatment is to remove the origin of nicotine. Again, keep tobacco, pipes, and other tobacco items out of your dogs’ grasp.

Also, remember ash and discarded materials have residual nicotine. The volume of consumption needed for toxicity is less, but the risk of contamination remains. Be alert about what your dog puts in its mouth when outside as well.

The risk of nicotine poisoning via cigarette or cigarette butts remains high, but you can prevent your furry friend from falling sick by taking extra care. Not only is nicotine harmful to dogs, but humans are at a larger risk from direct exposure to nicotine and its subsidiaries. So quit nicotine for your and your pet’s safety and health.

In every form of toxicity, prompt care and evaluation are crucial. Your doctor can work to avoid nicotine ingestion, encourage nicotine excretion, and manage any signs your pet exhibits. The treatment would undoubtedly involve causing vomiting and prescribing activated charcoal, if safe, to limit your pet’s nicotine absorption.

Additionally, treatment entails the management of convulsions and epilepsy. It includes stabilizing the cardiac and blood pressure disturbances, maintaining proper respiration, and administering intravenous fluids to aid in nicotine removal. The diagnosis for nicotine toxicity highly depends on the dosage quantity.

For example, minimal toxicity has a positive to excellent recovery rate, while exposure to high levels has a poor recovery rate. However, if pets are treated within the first four hours after poisoning, their diagnosis for full rehabilitation is vastly improved. Most veterinarians will warn you to carry your pet in for nicotine therapy.

The doctor performs a few tests and determines the dog’s size and health record to estimate the volume of nicotine they consumed and the effects he exhibits. The veterinarian can also prescribe you to bring your dog around the hospital for a couple of days so that the nurses can check their vital signs and keep a watch on them.

However, it is appropriate to induce vomiting in your dog in more severe situations and prescribe IV fluids. Additionally, activated charcoal can be injected into his belly to aid in absorbing the maximum amount of nicotine as possible. Oxygen can be administered to pets who are experiencing shortness of breath.

While some dogs suffer from nicotine overdose, the majority survive with timely care. Many that do survive usually resume normal function within 24 hours, but they can experience nausea for many additional days.

Also, for huge, stable dogs who have eaten just a trace of nicotine, your veterinarian would likely encourage you to watch your pet rather than calling you into the clinic. Simply keep a close eye on your dog for all the signs mentioned above.

For centuries, our canine companions have evolved into skilled scavengers willing to consume everything to live. Unfortunately, it is a double weapon for dogs since pets often get ill after eating inappropriate foods and items.

Some species are more prone to this activity than others, but nearly all dogs, regardless of how well conditioned, will sometimes consume food that upsets their digestive system. Curiosity plays a significant part when you allow your pet to roam in the backyard for extended periods.

Fortunately, most pets are tough animals and can typically have a disturbed stomach just when eating something they should not – whether it is pigeon or bunny excrement, pet faeces, or plastic containers.

Nevertheless, it is indeed essential to keep in mind that a variety of household products and disposables may be dangerous as well for our canine companions. Dogs and puppies often consume littered cigarette butts on the carpet, constantly cleaning them up when attempting to eat something else.

Bear in mind the potential effects of your dog eating a cigarette and be willing to see a sick pet.

What is nicotine poisoning?
Nicotine is a lethal substance. And not only in the long run, as smoking will set you on a steady path to cancer. It is a toxin, just like arsenic or chloride was. Enough of it will instantly destroy you. Nicotine poisoning is a term that applies to the toxicity associated with nicotine products.

Although nicotine toxicity was previously uncommon, it has become more widespread in recent years. This increase is due to the introduction of modern nicotine drugs. Electronic cigarettes or liquid nicotine are examples of both. Nicotine overdose is a dangerous illness that occurs when dogs consume excessive quantities of nicotine-containing drugs. Comparable to us, dogs have multiple nicotine sensors in the organs that act naturally under most situations.

However, when they are subjected to toxic nicotine levels, they may begin to malfunction, resulting in serious effects and, in some instances, demise.

How much nicotine from a cigarette will kill a dog?
Nicotine is very poisonous to animals. They could become irritated, anxious, vomit, or have diarrhoea before becoming fatigued and experiencing slower breathing, which may lead to death. Indications can be seen after ingesting only one cigarette in a ten-pound puppy.

The fatal dosage of nicotine required to kill a dog differs according to the dog’s age. Most regular cigarettes produce between 9 and 30miligram of nicotine, which would be a significant level of nicotine for any animal to get ill.

What happens if a dog eats cigarette ash?
Typically, concentrations of 9.2milligrammes or greater are nearly invariably lethal, and more so if prompt care is not pursued. Ingestion of as little as 5milligrammes may trigger serious effects and, in certain cases, death.

Mainly, dogs contract this disease by licking butts left on the floor and other public spaces. And if you are a regular smoker, take care and dispose of your tobacco responsibly to avoid accidentally poisoning your dog or any nearby canines and cats.

Avoid keeping cigarettes and cigarette butts within your dog’s grasp as it can result in the death of your dog owing to the nicotine content. Nicotine is a highly poisonous substance to dogs and other animals.